German Cinnamon Stars are a classic German Christmas cookie, these delicious meringue cookies have been given a Georgia twist and are made with toasted pecans! Chewy, delicious and totally festive! 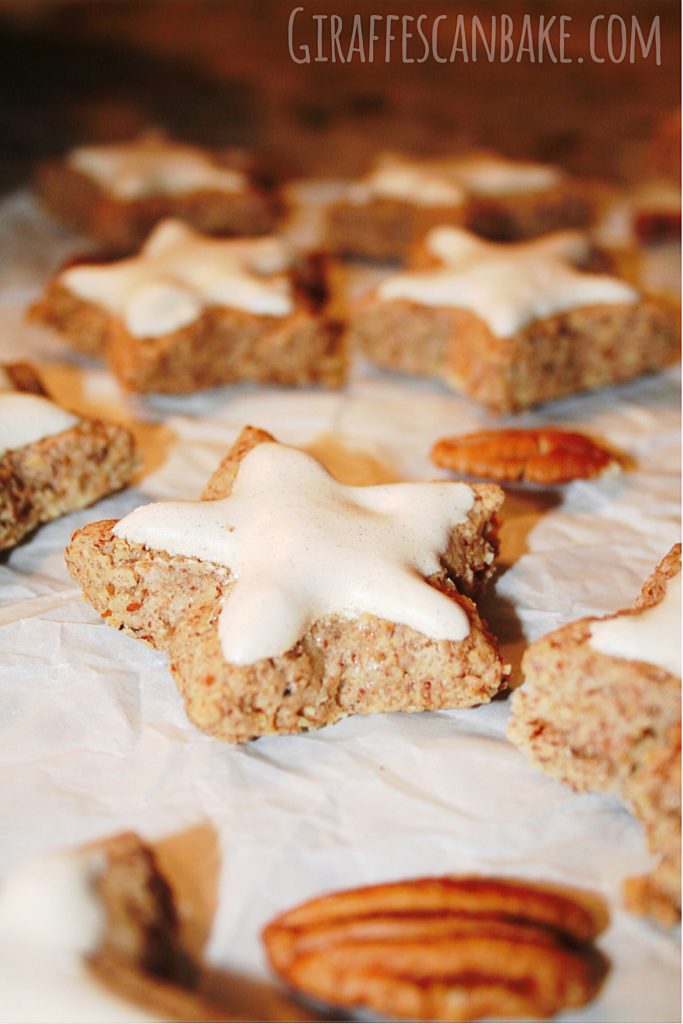 Merry Christmas Everybody!! It’s finally almost here, Santa is coming tonight yay! I’m bringing you a gift myself today and it’s Day 10 of my Countdown to Christmas recipes, in the lead up to Christmas I have been posting a festive recipe every day – Day 1 was Spiced Caramel, Day 2 was a Chocolate Peppermint Milkshake, Day 3 was Peppermint Puppy Chow, Day 4 was Mince Pies, Day 5 was Christmas Spiced Chocolate Cake, Day 6 was Frosted Shortbread Christmas Cookies, Day 7 was Spiced Chocolate Orange Puppy Chow, Day 8 was a Spiked Black Forest Milkshake and Day 9 was Christmas Spiced Pudding Cookies. My final festive recipe of the year are these ridiculously delicious German Cinnamon Stars. 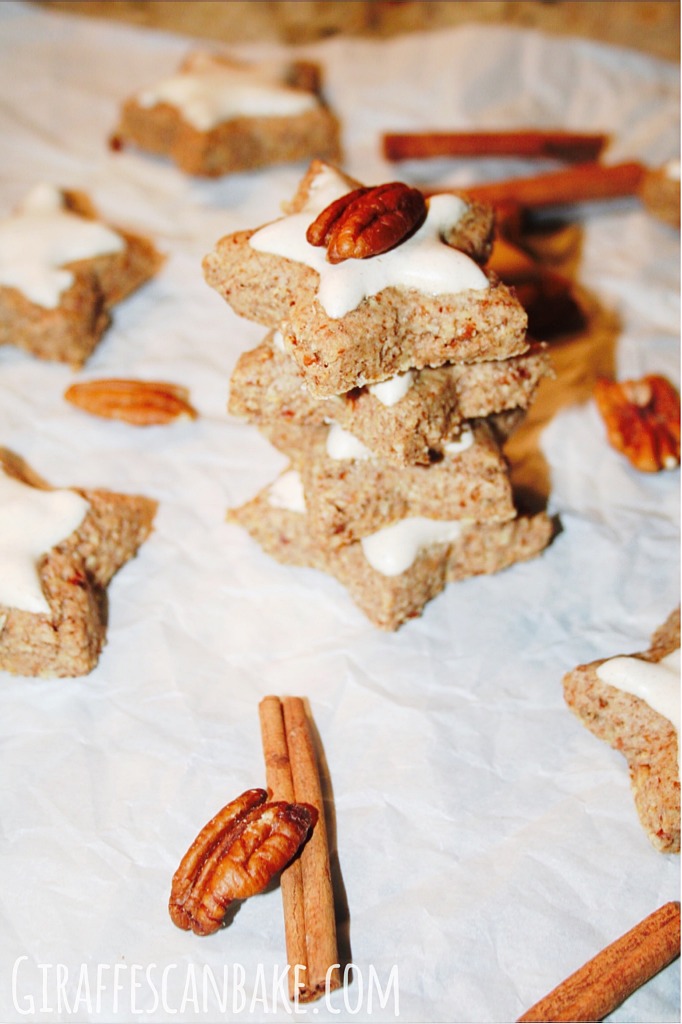 The yummy little cookies are traditionally made with almond flour and I first heard about them from Ginger and Ginger and Bread and I pretty much fell in love with them, I knew I had to make them soon. I made mine with pecans instead of almonds though because man, I just love pecans and I couldn’t pass up that opportunity! Plus, I’m spending the holidays in Georgia so it only makes sense to use pecans, right?! I swear I don’t purposefully just stomp all over baking traditions, I just can’t help but put my own stamp on them! I will make them with almond flour one day though, because these are too yummy not to make again and again, all year round! 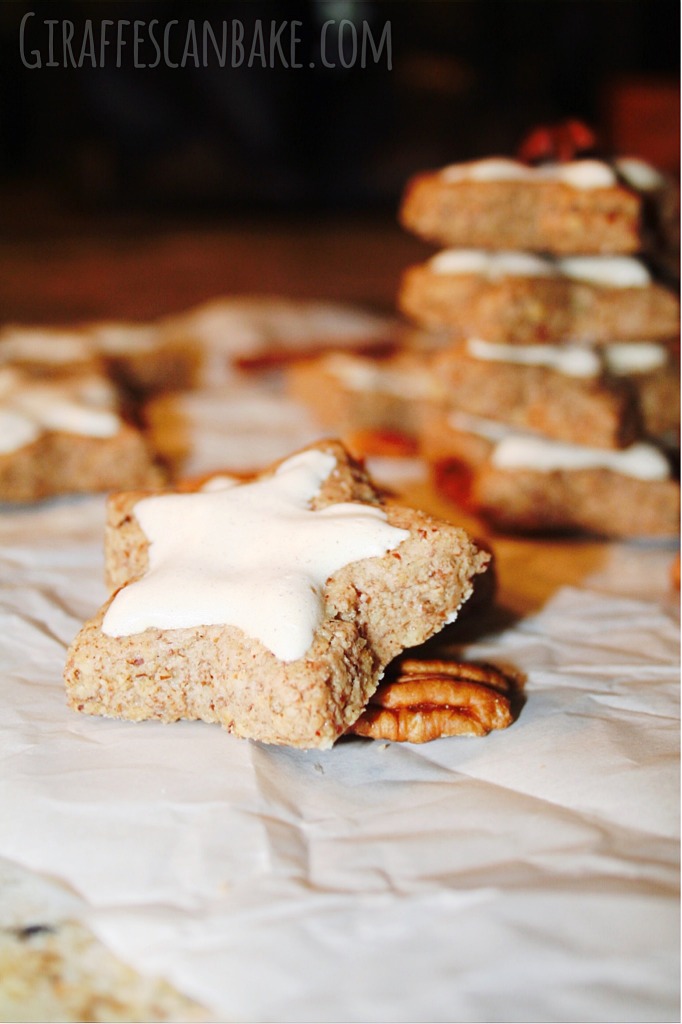 These are kind of like Germany’s answer to France’s macarons (I have no idea which one came first, so maybe it’s the other way around!) – they’re made basically with meringue and almond flour (or pecan flour, in my case), just like a macaron. These go much heavier on the nuts though so they’re much more robust and definitely feel way more German – none of that delicate French nonsense (disclaimer: I love French patisserie, no offense meant haha) just good ol’ fashioned deliciousness in a nice, chewy cookie that could hold it’s own in a fight!

I read quite a few recipes for these in preparation to make them and most of them mentioned they were a pain in the butt to make, so when mine came together really easily I was sure I had messed them up somehow! I guess I was just lucky though because they came out beautifully, I really can’t say enough good things about these cookies – they’re so much flavour and such a gorgeous texture for only a few ingredients, it makes me stop and appreciate the art of baking even more than usual! It’s crazy though isn’t it? How you can put just a few ingredients together in the right way and you come back with something so delicious?

I did have one little problem with these is and that is I rolled a few of them out a little too thin so they over baked a tad, so a couple of them don’t have that gorgeous chewy centre. But it’s okay, I have enough of the thick, chewy ones to go around and keep everybody happy! 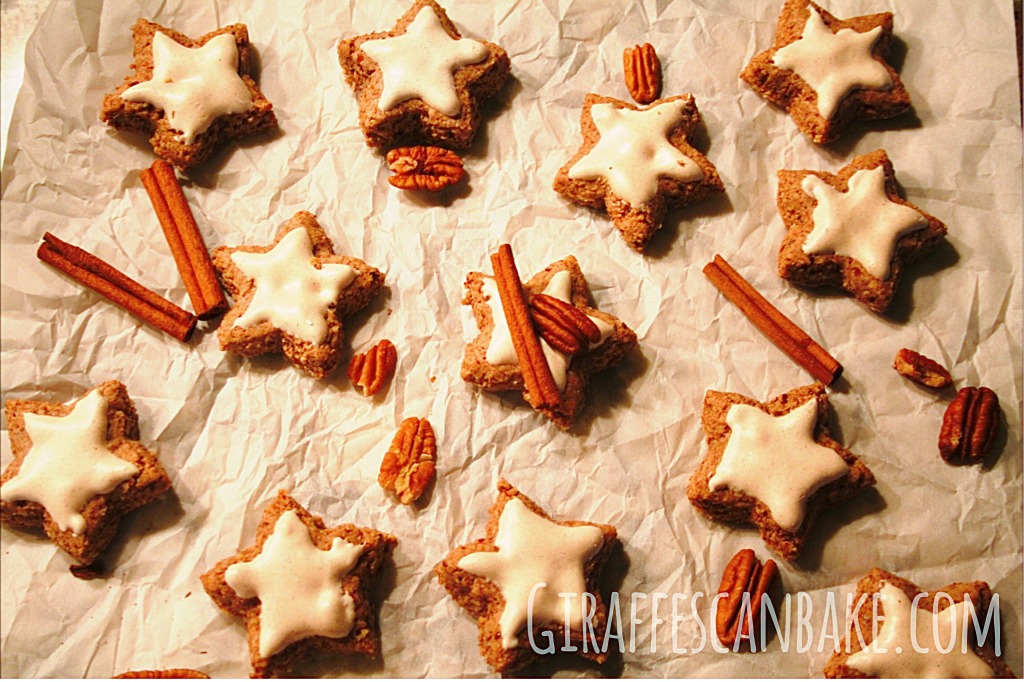 I know I said these came together pretty easily for me, but they do take a bit of prep. The night before I toasted the pecans to bring out their wonderful flavour, I like to do mine on the stove top so I can keep a close eye on them. I left them to cool over night and then threw them in a food processor to blitz them into flour, I did it in two batches with a 1/2 cup of icing sugar in each to help stop it clumping together and starting to turn into butter. You can process them as fine as you dare, mine was a little coarse as it started to clump a little but I really liked that texture. Once that’s done you just have to whip up the egg whites, add the sugar and whip until you have a nice stiff and glossy meringue. Then add your nut flour and mix it all up. Once your dough has chilled in the fridge for about an hour, you roll it out and cut out stars. Then top with some meringue and bake! Even after it’s chilled the dough is pretty sticky and can be quite hard to work with, it’s best to roll it out between two sheets of parchment. I didn’t have too much trouble with mine that way. This is not a cheap cookie to make either, I used a 1lb of pecans in one batch and pecans are not cheap (lucky for me, Leah’s mum bought me a 2lb bag from Costco) – you will get about 50 amazing cookies out of it though!

END_OF_DOCUMENT_TOKEN_TO_BE_REPLACED 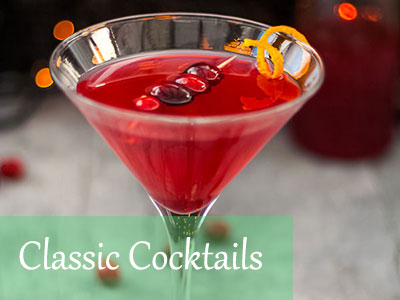 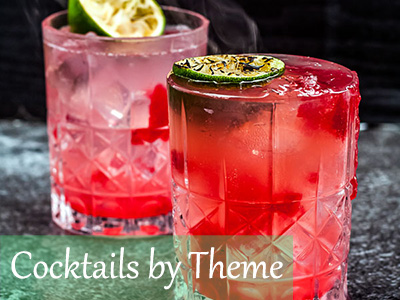